“Let Procurios think along; they have a lot of knowledge and they can advise you in the process very well.”

Missionary Group Middernachtsroep (Midnight Call) does worldwide, interdenominational and evangelical missionary work. The foundation is active in 14 countries around the world. In the Netherlands the department has two employees. The past year, the organization has switched to the solution /Fundraising and made huge efficiency gains.

Through positive reviews from the likes of Dutch political party ChristenUnie and the European Christian Mission, who already use Procurios’ software, Middernachtsroep contacted Procurios in 2018. High time to look back on the past year with Raphael Roos, missionary representative at the Group. He talks about their experience with the /Fundraising solution and about their collaboration with Procurios.

Saving time and far fewer operations with a CRM

“Previously, we were using software that was linked to the Swiss head office’s system,” Raphael explains. “This package worked cumbersome and took up a lot of time. They started looking for a new solution in Switzerland, so that was our cue to think about new software as well. That’s when we came into contact with Procurios.”

The solution /Fundraising has several products including CRM, Mailings, Donations and the add-on Memberships. Raphael says that since Middernachtsroep has been using /Fundraising, they have saved a lot of time, as the number of manual actions in the work processes has been significantly reduced: “Previously, I was spending at least three hours manually entering and transferring direct debits. Now this is done with just a few clicks.” Raphael also finds the advantage of being able to log into the platform anywhere and anytime extremely useful. “I was recently at a meeting, where a subscriber asked me something about his subscription. I logged into the Procurios Platform and was able to check it in the CRM very easily.”

Great assistance from Procurios with the CRM

In the beginning, Middernachtsroep had to figure out what to transfer to the new system and what not. “Procurios assisted us very well. At first, we had to discover each other a little bit – naturally. Once we got to know one another, it worked out great!”

The cooperation was pleasant, Raphael indicates. “We are very satisfied with this convenient system, since we’re always assisted quickly.”

“Previously, I was spending at least three hours manually entering and transferring direct debits. Now this is done with just a few clicks.”

Looking to the future & a tip for new customers

“In the future, we hope to use the Finance product – in addition to the CRM. What we might also want to do, is to move our webshop onto the Procurios Platform. This will make our work even easier, because everything will be linked.”

Raphael advises future Procurios customers to think carefully in advance about the work they do and about their wants for now and for the future. Raphael: “The power lies in communicating this well with Procurios. Let Procurios think along, because they have a lot of knowledge and they can advise you in the process very well.”

Want to know if Procurios can help your association or foundation? 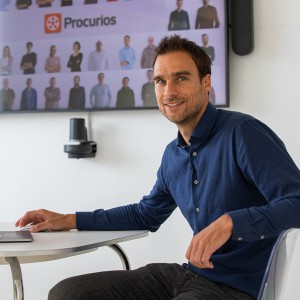